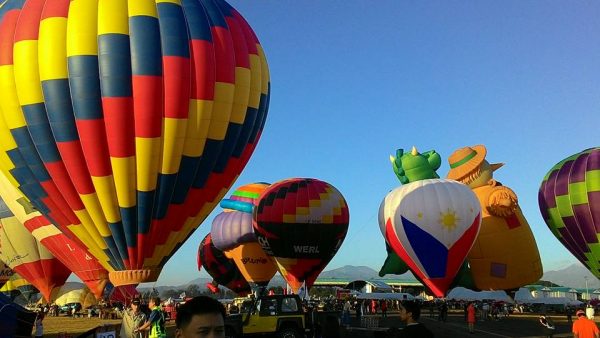 Serafin Tolentino, one of the organizers of the Lubao International Balloon Festival (LIBF) who is privy to the negotiations, said the two private corporations in partnership with the Bases Conversion and Development Authority (BCDA) and its subsidiary the Clark Development Corp. (CDC) are in the thick of plans on how to conduct the hot-air balloon fiesta here with limited flight capabilities.

This means that only tethered hot-air balloons will fly, Tolentino said. The event is planned in the first week of March behind the SM City Clark at the sprawling area of the 177-hectare CGC, now being advertised as the next center of economic growth in the country.

Tolentino said the flight activities at the Clark airport cannot be compromised with a “Notice to Airmen [Notam]” to allow the hot-air balloons to fly with the wind, thus the tethered dirigibles.

However, Tolentino said the Lubao International Hot Air Balloon Festival is set on April 5, 6 and 7 at the Pradera Verde in Barangay Prado Siongco in Lubao, where balloonists from all over the world are set to participate.

Meanwhile, the PIHABF, held annually every February in this free port for more than two decades, has been canceled for this year.

The organizers of the event said the holding of the annual spectacle did not push through this year due to lack of government support.

“We regret to inform you that because PIHABF has not received the commitment from our government partners on time, we will not be able to organize the annual The Philippine International Hot Air Balloon Fiesta [PIHABF] and The Weekend of Everything that Flies! in Clark this coming February,” a statement from PIHABF said.

“Thanks to everyone’s abiding enthusiasm, the PIHABF hosted 22 years of ‘A Weekend of Everything that Flies’ in Clark, Pampanga,” it added.

However, the PIHABF also said it may organize air shows outside this freeport for this year.

“We will announce plans and developments on our website, www.philballoonfest.net, and social media channels and we welcome your continued enthusiastic participation,” the PIHABF said.

The PIHABF said the event is the longest-running sports aviation event in Asia, gathering aviators and spectators from around the world for four days of non-stop flying action.

“From hot air balloons to aerobatic exhibitions, formation flying to radio-controlled aircraft, paragliding, skydiving, and dozens of on-ground activities, visitors are always guaranteed to have an unforgettable weekend,” the PIHABF said.

Hot-air ballooning started in Clark in 1994 to drum up attention and support to this former US air base abandoned by the Americans and devastated by the eruption of Mt. Pinatubo three years earlier.