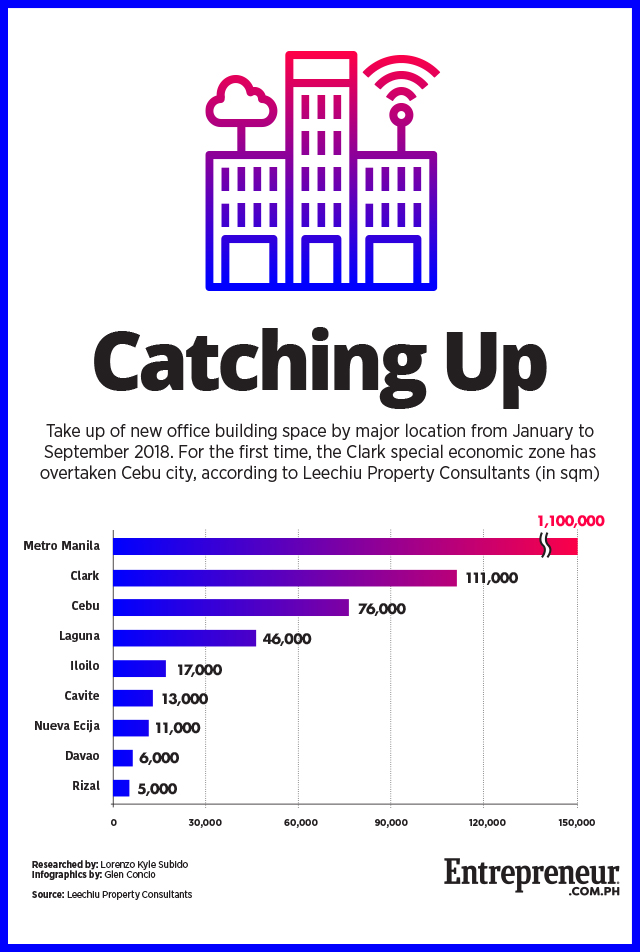 However, it is still only a fraction of Metro Manila, which remains the country’s most active office market. Transactions in the first nine months of 2018 reached 1.1 million square meters in the capital region. (See infographic)

“Starting this year, Clark will become the second-largest destination for demand for both BPOs (business process outsourcing companies) and POGOs (Philippine offshore gaming operators),” said David Leechiu, CEO of LPC, in a media briefing on September 18. “The companies that are [already] in Metro Manila and Cebu will now look for a third home, and that third home will naturally be Clark.”

Leechiu credited Clark’s rise in popularity to the large infusion of capital into the area in the past few years. And while majority of the office occupiers in Clark are still from the BPO industry, he sees several POGOs and government agencies taking up significant space in the area.

He added that much of these developments are focused on Clark Global City (CGC), a 177-hectare mixed-use development setting itself up as a major central business district in the country. Data from LPC’s research reveal that much of the pipeline office supply in provincial areas for the next seven years will come from Pampanga, and Leechiu highlighted CGC as the major contributor to that supply.

“There’s a lot of stock in the provinces, mostly in Pampanga [and] mostly in the Clark Global City, which I think will be the most important district outside Manila,” said Leechiu.