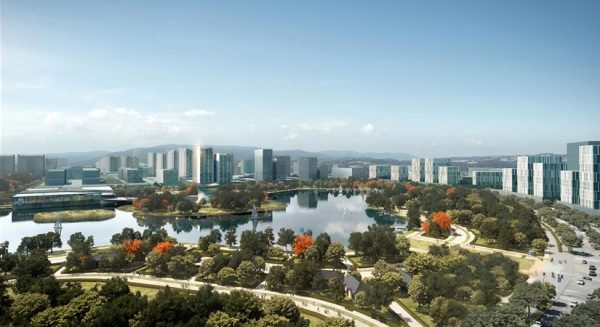 THE Clark area has become the top choice for office space outside Metro Manila this year, as more developers build there to take advantage of the region’s projected growth, according to Leechiu Property Consultants (LPC).

LPC said in a real estate market report that the net office take-up in Clark hit 111,000 square meters (sq.m.) in the year to date, making it the second largest market for office take-up after Metro Manila. The company noted that Clark has overtaken Cebu in terms of net take-up.

“Clark is the biggest recipient of demand after Metro Manila… this is because of the improved investor sentiment in Clark, and the BPOs (business process outsourcing) have developed the labor market already, which made it easier for other developers to enter Clark,” LPC President David Leechiu said in a press briefing in Makati yesterday.

Both BPOs and Philippine Offshore Gaming Operators are starting to expand in Clark, alongside some government agencies like the Bases Conversion and Development Authority, Department of Transportation, and Philippine Amusement and Gaming Corp.

The take-up in Clark is part of the record 1.08 million sq.m. in total office take-up across the country recorded as of September. The bulk of the total can be seen in Metro Manila at 799,653 sq.m. The information technology-business process management (IT-BPM) industry occupied a total of 301,000 sq.m in the year to date while offshore gaming firms took up 171,000 sq.m.

The take-up in Metro Manila was seen mostly in Bonifacio Global City with 262,000 sq.m of office space, followed by Quezon City, the so-called Bay Area, Alabang, Ortigas, and Makati.

Mr. Leechiu noted that the lower take-up in Makati was due to lower vacancies in the financial district. He however projected a resurgence in Makati, as developers will soon be reconstructing old buildings in the city.

“There are lots of old buildings that will be reconstructed. So the 20- to 40-year old buildings are going to give way to new development… there’s going to be a massive injection of capital in Makati,” Mr. Leechiu said.

Amid the high take-up, more projects are set to come on stream in the next six years, adding 3.83 million sq.m. to Metro Manila’s office supply of 10.01 million sq.m. as of end-2017. LPC said demand will remain strong as IT-BPM and online gaming firms have pre-committed to space from the office buildings that will be completed from 2019 to 2022.

Meanwhile, provincial areas have so far recorded a net take-up of 283,948 sq.m. Aside from Clark, demand hot spots for office space outside the capital are Cebu, Laguna, Iloilo, Cavite, Nueva Ecija, Davao, and Rizal.

Around 548,000 sq.m of office space is expected to be added into the Luzon office supply, excluding Metro Manila, until 2025, while 305,000 sq.m are in the pipeline for Visayas and Mindanao, excluding Cebu.