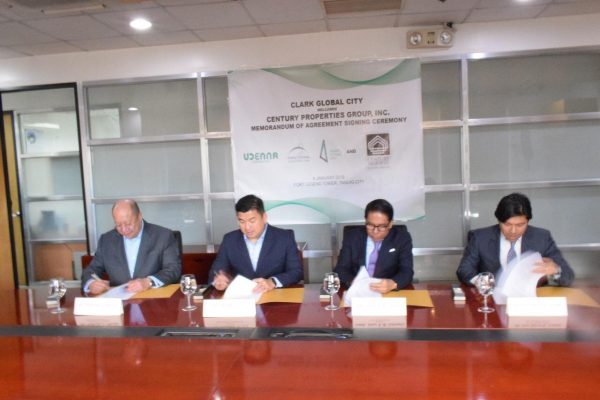 THE DEVELOPER of Clark Global City has partnered with Century Properties Group, Inc. (CPG) for the development of residential and office buildings in growing business district.

In a statement over the weekend, Global Gateway Development Corp. (GGDC) said it signed on Jan. 9 a memorandum of agreement with CPG for the establishment of a joint venture firm. The company will be in charge of developing 2.6 hectares of land inside the 177-hectare Clark Global City in Mabalacat, Pampanga.

“This is in line with our strategy to fast-track the development of Clark Global City. By joining forces with the country’s leading local developers, we can sooner unlock the potential of Clark Global City, expand our economy’s capacity, nurture businesses and generate more employment opportunities,” GGDC Chairman Dennis A. Uy said in a statement.

Under the partnership, GGDC and CPG will develop a combination of residential and office buildings with retail components.

CPG Chief Operating Officer Marco R. Antonio said the company looks to take advantage of the growth in Central Luzon, noting that it has become the second largest office market in Luzon next to Metro Manila.

“As massive infrastructure projects are underway to make Clark connected and highly accessible, Century Properties wishes to ride on this growth momentum by serving the real demand in the office and residential markets,” Mr. Antonio said.

To note, Clark Global City is a 10-minute drive from Clark International Airport, and is also set to benefit from the completion of the NLEx-SLEx Connector Road, the Subic-Clark Cargo Railway, and the PNR North Railway in the next two to three years.

Aside from office leasing and high-rise condominium developments, CPG has recently forayed into the affordable housing and leisure property markets, as it sought to have a more diversified source of income in the following years.

The Udenna Group took control of Clark Global City in 2017, with the goal of transforming it into a central business district. The group has lease rights for the entire property until 2085. It will spend $5 billion in the next 10 years for its horizontal development.

Citing a December 2018 study by real estate consultancy firm Leechiu Property Consultants, GGDC said that Clark Global City accounted for majority of the 156,000-square meter demand for office space in Clark. This makes it to most in-demand development outside Metro Manila.