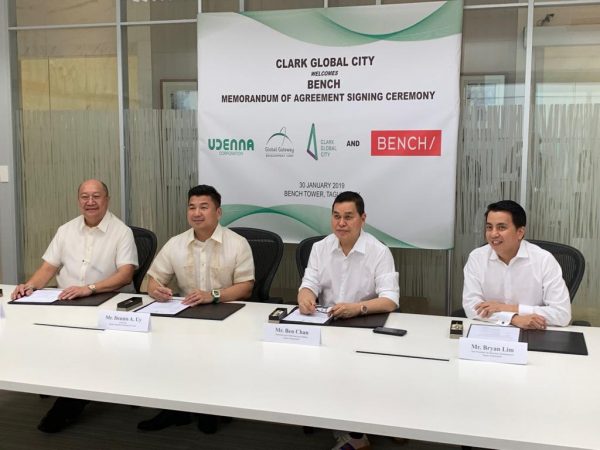 MANILA, Philippines — Suyen Corp., the group behind the Bench brand, is expanding its real estate footprint outside Metro Manila with an investment in Dennis Uy’s Clark Global City in Pampanga.

Suyen, led by its chairman Ben Chan, and Global Gateway Development Corp. (GGDC) signed a memorandum of agreement for the sublease of 2,886 square meters at the latter’s 177-hectare leasehold within the Clark Freeport Zone in Mabalacat, Pampanga.

GGDC is a subsidiary of the Udenna Group, Uy’s fast growing holding company.

Suyen, the company behind the iconic Bench clothing brand plans to build an office tower for lease in Clark Global City, riding on the estate’s increasingly growing attraction from office tenants looking for spaces outside Metro Manila.

Uy, chairman of GGDC said Suyen’s entry in the Clark Global is a welcome move.

“We thank Suyen for choosing to invest in Clark Global City and for sharing our vision for a central business district that will create more opportunities for Filipinos beyond the country’s major cities that have become highly congested,” he said.

Chan said the company is bullish on the growing economy outside of Metro Manila.

“We’re bullish on the Philippine economy and seeing how it’s slowly but surely extending to key cities outside of Metro Manila,” he said.

Leechiu Property Consultants has cited Udenna’s master-planned development as the main driver of office demand in Clark, the second-largest office market in the Philippines amid the government’s push to transform the former military base into a modern and disaster-resilient metropolis.

“Our government has been working hard to promote Clark and to make it much more accessible. There’s a lot that’s been done to develop Clark and even more that can be done to help it reach its full potential, so it’s not hard to see it becoming the next big metropolis it’s poised to be,” Leechiu said.

Clark Global City is among the four major investment districts in Clark, a former military base being transformed into the country’s next big metropolis as part of efforts to decongest Metro Manila and make the economy’s growth inclusive.

The development is positioned to become the central business district in Clark, given its strategic location in a freeport zone; proximity to major infrastructure developments such as the expansion of the Clark International Airport, NLEX-SLEX Connector Road, Subic-Clark Cargo Railway and PNR North Railway; and access to young and highly skilled talents.

The estate has a buildable area of more than 109 hectares.

Clark Global City, he said, would be an ideal place to put down roots.

When Udenna took over in 2017, it welcomed local partners to develop it into a central business district.

The group has since signed a sublease agreement with SM Prime Holdings Inc. and a memorandum of agreement with Century Properties Group Inc. for a joint venture.

“We see the significant role of Clark Global City in helping sustain and even accelerate our economy’s growth,” Uy said.

GGDC is the owner and developer of Clark Global City. It is a wholly owned subsidiary of Udenna Development (Udevco) Corp.,  Udenna’s real estate and property development arm.

Uy’s Udenna has a diversified portfolio of businesses including petroleum and oil through Phoenix Petroleum; shipping and logistics through Chelsea Logistics; real estate through Udenna Development; education through Enderun Colleges; and infrastructure through Udenna Infrastructure, among others.

Aside from its Clark development, Suyen also has a 24-story mixed-use, high-rise building called Bench Tower in Bonifacio Global City in Taguig. It houses the company’s corporate offices and also offers office spaces for lease.